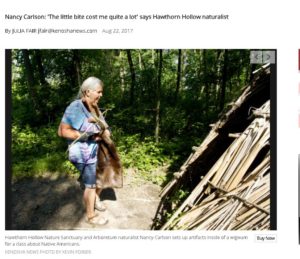 A tick clung to Nancy Carlson’s hip after a workday spent outside in 2013.

“I pull ticks off all the time, it’s not a big deal,” Nancy Carlson, a naturalist at Hawthorn Hollow Nature Sanctuary and Arboretum on Green Bay Road, said.

She was taught as a naturalist that a bull’s-eye rash should raise concern about contracting Lyme disease. When she was bitten, it never appeared.

Weeks later joint pains and flu symptoms took over her body. She tested positive for Lyme and was prescribed antibiotics.

“But it wasn’t enough,” Carlson said. “After that I was never better.”

Breathing and heart issues landed Carlson in the hospital twice during her treatment, due to symptoms caused by the toxins building up in her body as the Lyme-causing bacteria deteriorated.

She saw a rheumatologist, an endocrinologist and a neurologist, trying to get the best treatment for her Lyme.

“None of those knew the truth about Lyme disease,” she said.

The average patient sees five doctors over two years before being diagnosed, according to the International Lyme and Associated Diseases Society, a nonprofit dedicated to educating the public and doctors about proper Lyme treatment. It also states 40 percent of Lyme patients end up with long-term health problems.

Read the rest of the article in Kenosha News>>

Adrenal Fatigue
November 13, 2022
The Differences Between Acute and Chronic Lyme Disease
October 30, 2022
Women's Thermography Breast Screenings
October 15, 2022
We can understand and see your pain with Inflammation Thermography
October 1, 2022
What is Medical Thermography?
September 26, 2022